Bad Bunny comes to Moda Center on Monday 28th February 2022 on El Último Tour del Mundo! The tour is named after his chart-topping, record-breaking, Latin Grammy Award-winning album of the same name, and he'll be performing material from the album, including his smash hit single "Dakiti"! The Puerto Rican rapper is known for his sensational, flamboyant, eye-catching shows and for giving fans all he's got when he performs live! Get ready for some multi-platinum Latin trap that will get you moving! 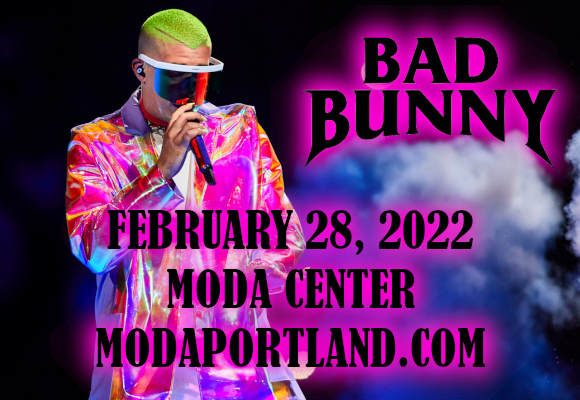 Puerto Rican rapper, singer, and songwriter Bad Bunny began his career in 2013, releasing his music independently through SoundCloud. His 2016 single "Soy Peor" served as his breakthrough, reaching number 19 on the Billboard Hot Latin Songs chart. The following year, he truly made his mark, featuring on fifteen tracks that charted on the Billboard Hot Latin Songs chart. His crossover and international success came in 2018, when he featured with J Balvin on Cardi B’s "I Like It", which hit number-one on the Billboard Hot 100 and received a nomination for the Grammy Award for Record of the Year. He followed with "Mia", a collaboration with Drake that reached number five on the Billboard Hot 100. Bad Bunny’s debut album X 100pre (2018) was awarded a Latin Grammy for Best Urban Music Album and his second solo studio album, YHLQMDLG (Yo hago lo que me da la gana) earned him a Grammy Award for Best Latin Pop Album. His third and most recent studio album, 2020’s El Último Tour Del Mundo, became the first all-Spanish-language album to top the US Billboard 200 and launched the Billboard Global 200 number-one single "Dakiti". 2020 also saw him become the first non-English language act to be Spotify's most-streamed artist of the year.