GRAMMY®, TONY®, and Emmy® Award-winning, and Golden Globe® Award-nominated, performer Ben Platt comes to Moda Center on Sunday 4th September 2022 (Rescheduled from Thursday 31st March 2022) as part of his Reverie Tour! The phenomenally talented triple-threat, who took the world by storm with his performance as Evan Hansen in Broadway's Dear Evan Hansen, will be treating the audience to tracks from his gorgeous sophomore album Reverie! Platt is as charming as he is talented, and you can guarantee that his show will leave you thoroughly entertained! 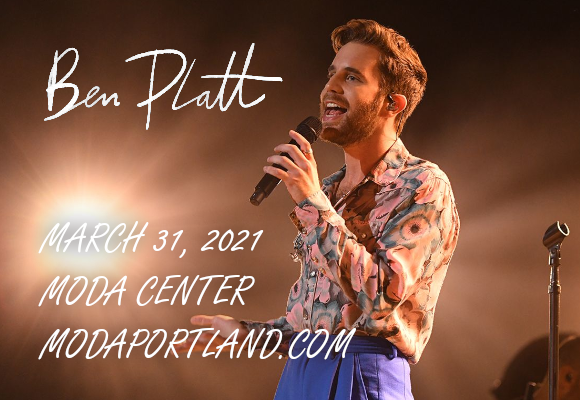 American actor, singer, and songwriter Ben Platt first became known performing musical theater, in appearing in productions of The Sound of Music (2006) and The Book of Mormon (2012–2015) and starring in the titular role in the Broadway musical Dear Evan Hansen (2015–2017). His performance as Evan earned him multiple awards, including a Grammy, Tony, and an Emmy Award. He is the youngest Tony Award for Best Actor in a Leading Role in a Musical solo winner, winning at the age of 23. In film, Platt has had roles in the  Pitch Perfect film series, Ricki and the Flash (2015), and Run This Town (2019).  He stars in the Netflix comedy-drama series The Politician, for which he was nominated for the Golden Globe Award for Best Actor – Television Series Musical or Comedy. In 2017, Platt signed with Atlantic Records and was also  included on the annual Time 100 list of the most influential people in the world. In 2019, he released his debut studio album, Sing to Me Instead. He followed with a 2020 concert film, titled Ben Platt Live from Radio City Music Hall, which debuted on Netflix. His sophomore album, reverie, was released in 2021.