They gave rock n' roll a great name! Now Bon Jovi is not in for throwbacks. These bastions of rock music are pushing forward to "Bon Jovi 2020" ! This much awaited tour gives them another stab at holding their unbreakable record of being one of the top touring bands of all time. And this tour will definitely shake things up and pack in more rock fans, as Bon Jovi shares the stage with another formidable rock icon– Bryan Adams. Bon Jovi & Bryan Adams are due to hit the Moda Center stage on Thursday 11th June 2020. It's now or never! Book your tickets now! 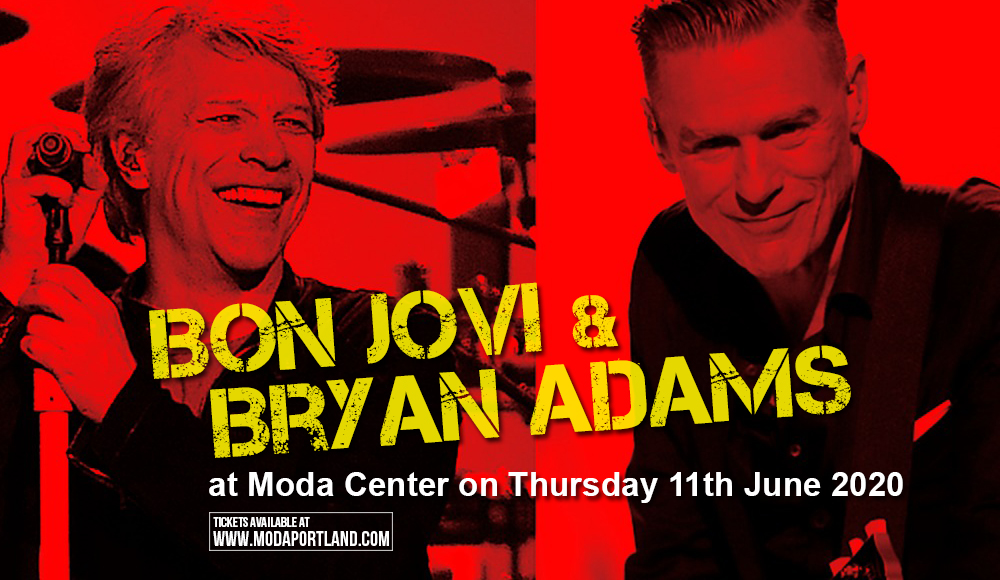 It's hard to describe the '90s hard – glam rock scene without highlighting the name Bon Jovi. Their twin-tower singles "You Give Love a Bad Name" and "Livin' on a Prayer" cemented Bon Jovi's staying power as their third album and breakthrough album, "Slippery When Wet", sold over 20 million copies. Indeed, they're a loaded gun of hits! "Bad Medicine", "I'll Be There for You", "Always" , "It's My Life", "Bed of Roses", "Someday I'll Be Saturday Night"., "Born to Be My Baby", "Lay Your Hands on Me", "Living in Sin", and the list goes on and on… With their anthemic monster hits that dominated the airwaves, their concert tours became the epitome of experiencing arena rock music at its finest. With nearly 10 million tickets sold in just the last decade alone, Pollstar says: “One can count on one hand the number of rock bands that broke out in the 1980s that are still successfully touring today, but doing so with fresh, new music that retains the authenticity that is at the heart of the best in rock ‘n’ roll.” That's Bon Jovi for ya!

Bon Jovi has 14 studio albums to their name, as of last counting. They raked in sales of more than 100 million records worldwide, making them one of the bestselling American rock bands. As they sung in "Wanted Dead or Alive" –they've "seen a million faces and they've rocked 'em all," has a ring of truth to it as they performed more than 2,700 concerts in over 50 countries for more than 34 million fans. Bon Jovi was inducted into the UK Music Hall of Fame in 2006, and into the US Rock and Roll Hall Of Fame in 2018. They were also recepients of the Award of Merit at the American Music Awards in 2004, and Jon Bon Jovi and Richie Sambora were inducted into Songwriters Hall of Fame in 2009.

Joinining Bon Jovi in this particular tour is Canadian rocker Bryan Adams. Hailed as the best selling Canadian rock artist of all time, Adams has sold over 100 million records over nearly 40 years in showbusiness. His greatest and best loved hits include "Run to You", "Summer of '69", "Heaven",
"(Everything I Do) I Do It for You". "All for Love" and "Have You Ever Really Loved a Woman?".

These rock giants are ready to rumble! What could be more exciting than that?!! Get your hands on these hot tickets now!