Outlaw country sensation Brantley Gilbert is on the road once again this summer, bringing his larger-than-life new show to Moda Center on Friday 20th March 2020! The Fire't Up Tour supports the release of Gilberts fifth studio album, Fire & Brimstone, and sees him joined by support acts Chase Rice, Dylan Scott and Brandon Lay!

“I truly feel like we’re at the point that we can let the music take us where it is meant to go, so with every new album we like to change up our show and make it something that plays to those stories and characters,” Gilbert said in a statement. “We’ll of course still do the hits our fans love, but we are looking at this as an opportunity to turn up the heat a bit and give the songs on Fire & Brimstone a chance to really rock.” 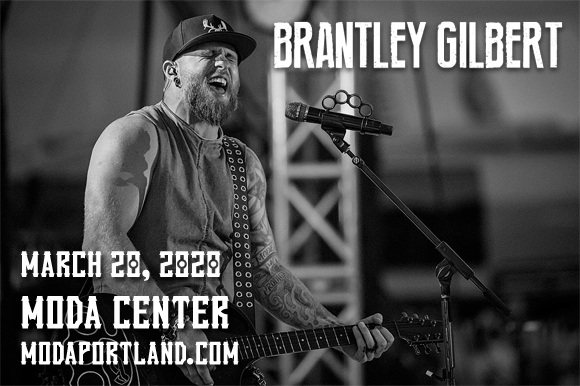 Drawing from the creative well of American renegade performers like Bruce Springsteen and Steve Earle, as well as from traditional country and bands like Lynyrd Skynyrd, Brantley Gilbert is a dynamic performer with a sound all his own. After cheating death at 19 years old, Gilbert dedicated himself to pursuing music as a career and relocated to Nashville, where he gained work as a songwriter. Signed to Warner Chappell Publishing, his songs were recorded by various artists, including Jason Aldean and Colt Ford, and before long he had written enough material for an album of his own. The album, Modern Day Prodigal Son, was released in 2009 and caught the alttention of Colt Ford's label, Average Joes Entertainment, who signed Gilbert. To date, he has released four studio albums, two of which have hit number one on the Billboard Country Albums chart, and three of which have hit the top ten on both the Country chart and the Billboard 200. His fifth studio album, Fire & Brimstone, is due for release this year.