Cher comes to Moda Center on Tuesday 19th November 2019 on her incredible, ABBA-inspired Here We Go Again Tour! The internationally renowned veteran pop diva will perform in support of her 2018 ABBA tribute album, Dancing Queen, and will be joined on the stint by funky disco-masters Nile Rodgers & Chic! A must for all movers and groovers! 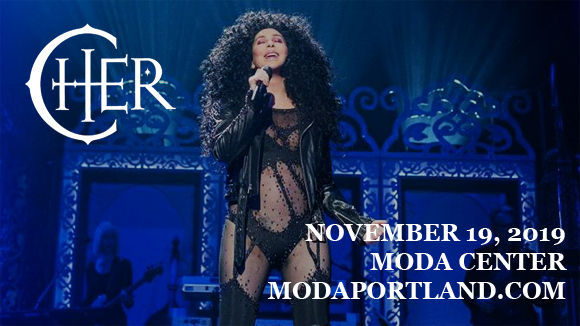 Best known for her hits "Bang Bang (My Baby Shot Me Down)," "Gypsys, Tramps & Thieves," "If I Could Turn Back Time," "Love and Understanding" and "Believe," pop icon Cher is the only artist to date to have a number-one single on a Billboard chart in six consecutive decades, from the 1960s to the 2010s. One of the best-selling artists of all time with over 100 million records sold worldwide, she has also been the recipient of several awards and accolades throughout her career, including a Grammy Award, an Emmy Award, an Academy Award and three Golden Globe Awards, as well as a Cannes Film Festival Award, and an award from the Kennedy Center Honors and the Council of Fashion Designers of America, among others. Cher is also known for her activism, philanthropy and dedication to LGBT rights and HIV/AIDS prevention.