Grammy Award-winning country music duo Dan And Shay are coming to Moda Center on Friday 30th October 2020 as part of their extensive 2020 arena tour! The chart-topping artists, who recently released their huge hit "10,000 Hours" with Justin Bieber, are performing on their biggest stint to date, so expect them to pull out all the stops for this larger-than-life show! They'll also be bringing special guests with them for select dates, so keep your eyes peeled! 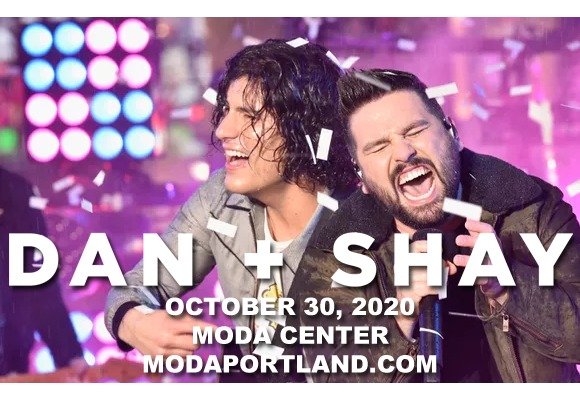 American country pop music duo Dan and Shay formed in Nashville, Tennessee in 2012. Dan Smyers and Shay Mooney met when Smyers performed as part of two bands, Bonaventure and Transition, and Mooney was a solo artist on T-Pain's Nappy Boy Entertainment label. After meeting, they began writing together straight away and soon had publishing houses vying to sign them. They eventually took a deal with Warner Records Nashville and released their debut album, Where It All Began, in 2014. The album debuted at number six on the US Billboard 200 and number one on the US Top Country Albums chart. To date, the duo has released three studio albums, launching nine singles, five of which have become Country Airplay chart-toppers, with two topping the Hot Country Songs chart as well.