What an incredible concert for music fans – two of the greatest rock bands of all time have announced that they will be joining forces for an unstoppable 2020 tour! Thats right, you may not believe it, but it is really happening – Def Leppard & ZZ Top are heading out on the road! You can catch both Def Leppard and ZZ Top LIVE at the Moda Center on Saturday 17th October 2020! Tickets are NOW available! 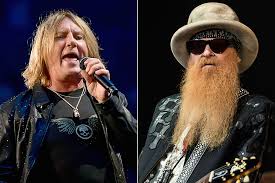 Both of these legendary groups hardly need an introduction as Def Leppard and ZZ Top have become worldwide superstar names and their legacy continues through the decades as they continue to tour their incredible collection of hit songs to their international fans.

Def Leppard gained their massive success during the 1980s – 1990s as they transformed the music scene with their heavy metal music. The English rockers received a strong fan base that has stayed with them through the years, watching and following their every move as they dropped countless powerful hit songs from their unforgettable albums. Def Leppard became instantly recognizable with one of their biggest anthems to date "Bringin' On The Heartbreak" which was one of the first rock music videos ever to be played on MTV. This epic release ensured them to hit the big time and they continued to top the charts and gain impressive album sales such as their Pyromania record which certified diamond – with their long standing success Def Leppard are one of the biggest bands of all time.

ZZ Top are up there as a fellow Rock and Roll Hall of Famer, this American rock trio similarly stormed the world during some of the greatest eras in rock music. With their classic blues inspired sound, they quickly became a firm favorite band on the scene throughout the 1970s up until today. With their debut album they hit the ball rolling in 1971, but nothing could prepare them for their biggest selling release of Eliminator back in 1983. As it pushed them into the highest selling artists of all time in the US and took their career to the next level for all to see. The success hasn't stopped ever since…

This co-headline show is bound to be an out of this world experience as the two bands unite and showcase themselves like never before! Come and join in on one of the biggest tours of the entire year!