This year has been full of good news for Deftones fans! The cult alt-metal favorites have a new album waiting in the wings (their first since 2016's Gore), and they'll be taking their new material on the road, bringing their new tour to Moda Center on Thursday 14th April 2022 (Rescheduled from Wednesday 22nd September 2021)! The Sacramento band will be joined by French heavy metal act Gojira & "post-genre" artist Poppy in support! Deftones' Chino Moreno had this to say about the making of the hotly anticipated new album:

"We are kind of enjoying our time making it," the singer said. "It's been a cool process," he continued, "we get together, we work for a couple weeks, whether that's just making noise and coming up with ideas and then everybody just goes home and comes back to work on 'em a little bit more." 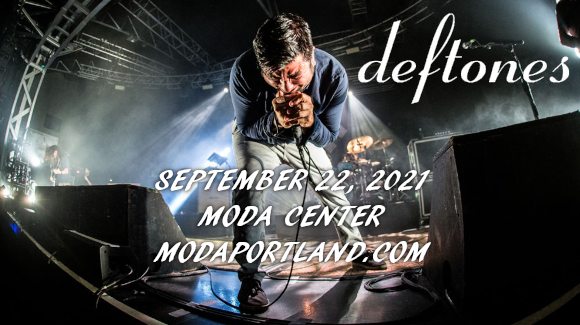 Even in the two decades since the band's inception, there's still no-one who sounds quite like Deftones. Formed in Sacramento, California in 1988, the band made waves in the metal world by taking seemingly disparate influences like grunge, hardcore, dream pop and shoegaze, and blending them to create a unique sound that set them apart from their peers and influenced countless future acts. After the release of two relatively successful albums, the band's breakthrough came with 2000's White Pony, which reached number 3 on the Billboard 200 and launched the hit single "Change (In the House of Flies)." It also earned the band a Grammy Award for Best Metal Performance for the song "Elite." Over the years, the band has released a total of eight studio albums, five of which have hit the top five on the Billboard 200, and the group's ninth studio album is due for release in 2020.