EVENT POSTPONED (date TBA). Hold on to your tickets! They will be valid for the new date once announced.

Are you ready for the Dude Perfect 2020 Tour?! YouTube sensations Tyler Toney, Cody Jones, Garrett Hilbert, and twins Coby and Cory Cotton – aka Dude Perfect – are headed to Moda Center on Saturday 11th July 2020 for a high octane live show that will leave you dumbfounded! Expect nutty stunts, insane games, hilarious anecdotes and more from these talented, larger-than-life internet stars who take sports to a whole new level!

“After incredibly positive feedback from the fans who completely sold out our first ever tour, we’re back this summer better than ever in even larger arenas,” said Coby Cotton. “With new competitions, more comedy, and all the excitement and action you’d expect from us here at Dude Perfect, we know that the 2020 Dude Perfect Tour will be your family’s favorite memory of the summer.” 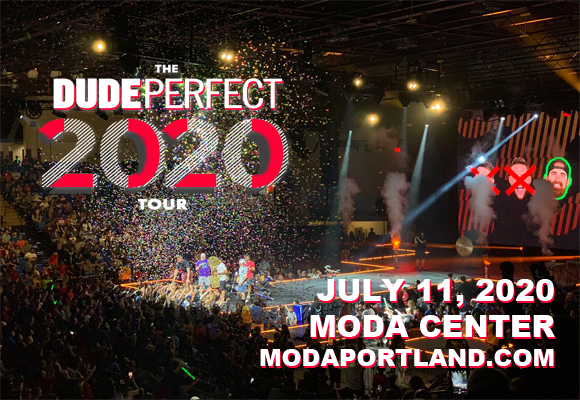 YouTube sensations Dude Perfect are a sports entertainment group known for their skilled trickshots and stunts that have found viral support through social media. Consisting of twins Cory and Coby Cotton, Garrett Hilbert, Cody Jones, Tyler Toney, the group met whilst studying at Texas A&M University where they were roommates. They first began uploading videos to YouTube in 2009 and soon developed a following and attracted endorsements and celebrity collaborators. After 10 years of uploading sports and comedy videos that include trickshots, stereotypes (parodies of everyday sports situations), battles (good-natured competitions), overtime (a talk show style segment) and games with consequences, Dude Perfect have racked up over 9 billion total views to date and their channel has over 47 million subscribers. They are the second most subscribed sports channel on YouTube and the eighth most subscribed channel overall. Dude Perfect has also launched a mobile gaming app and a television series that airs on Nickelodeon – The Dude Perfect Show.