EVENT RESCHEDULED TO MONDAY 24TH MAY 2021. Originally Sunday 25th May 2070. All original tickets are still valid!

Acclaimed singer songwriter James Taylor comes to Moda Center on Monday 25th May 2020 in support of his brand new album, American Standard, which sees him put his own twist on a series of time-honored and cherished songs! Joining him will be fellow Rock and Roll Hall of Fame inductee and songwriting legend Jackson Browne!

"I've always had songs that I grew up with that I remember really well that were part of the family record collection," Taylor said in the video announcement for his record. "And then I basically had a sort of a sense of how to approach, so it was natural for us to sort of put this project together, 'American Standard.'" 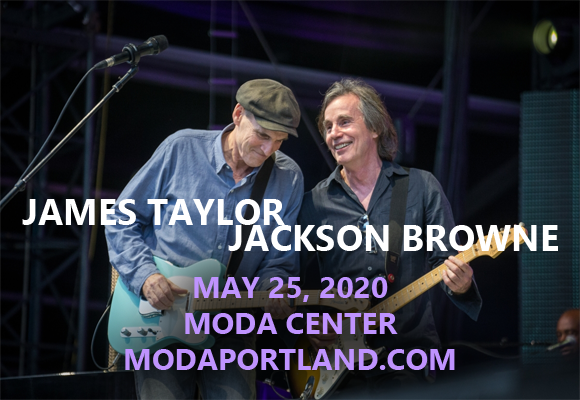 With his candid, contemplative lyrics and mellow voice, James Taylor breathed life into the music of the 1970s, inspiring a new kind of songwriter. Although his youth and early 20s were plagued by drug addiction, he was also embued with an obvious talent, and his 1970 breakthrough album Sweet Baby James was a huge critical and commercial success that set him on the path to becoming one of the world's best-selling artists of all time, selling over 100 million records worldwide throughout his career. His success was not only confined to his younger years, either – every album that he released from 1977 to 2007 sold over one million copies, and Taylor's first US number one album came in 2015 with Before This World. He has won five Grammy Awards for his music, and has been inducted into both the Songwriters and Rock and Roll Halls of Fame. In addition, he has been awarded the Presidential Medal of Freedom and the Kennedy Center Honors.