Premiere comedian Jo Koy, currently creating big waves in the stand-up comedy scene after his standing ovation performance at the Tonight Show with Jay Leno, and the rousing success of his comedy specials on Comedy Central and Netflix, is currently on a world tour — "Just Kidding". No, seriously, Jo Koy is on a roll and on a road trek that will take him right here at the Moda Center stage, on Saturday 21st March 2020. This Filipino-American comic draws inspiration and anecdotes from his family and his unique Filipino upbringing, that he manages to tell it as it is in a fun-filled and very relatable manner. With Jo Koy's brand of comedy, this is a show that the whole family would definitely enjoy. Best for loved ones, family, and friends. Share the gift of laughter so buy tickets for everyone! 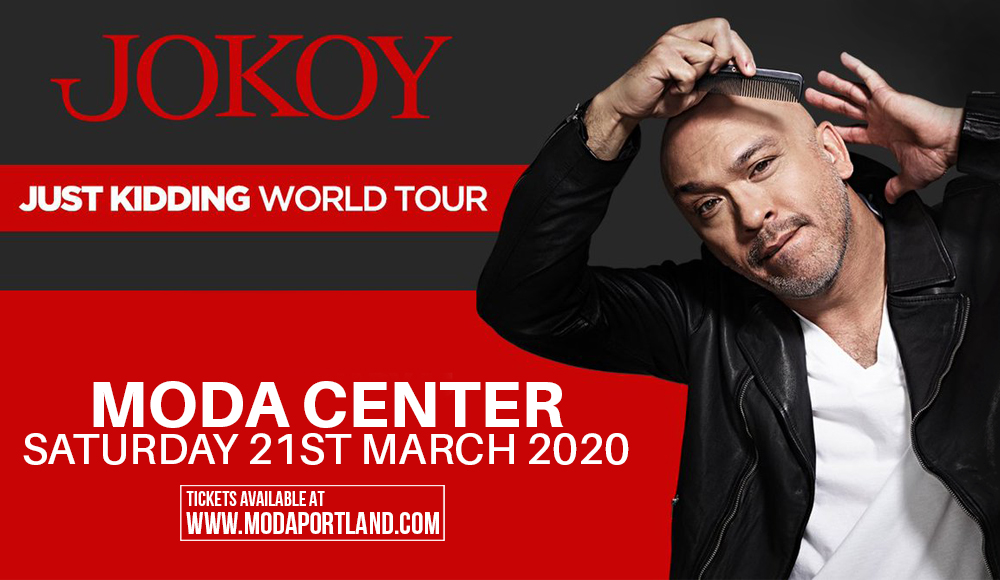 “Just Kidding World Tour.” Jo Koy has indeed gone a long way. From his humble beginnings performing at a Las Vegas coffee house, Jo Koy has infected many parts of the world with his delightful and amusing sense of humor. Jo Koy is of Filipino and European-American descent and was based as a university – college student when he chose to heed the call and seriously pursue a career in stand up comedy.

Starting off with open mic performances in clubs in Las Vegas, he soon clinched a regular spot on the show Catch a Rising Star at the MGM Grand Hotel and Casino. Then a talent scout spotted him and got him his first television appearance on BET's ComicView. Several TV appearances followed suit, but his groundbreaking stint came when Jo Koy performed on The Tonight Show with Jay Leno, being one of a select few comics to receive a standing ovation on the show.

From there, Jo Koy was making a name for himself in major stages, including a record-breaking feat for the most tickets sold by a single artist at 23,000 tickets and 11 sold-out shows at The Neal S. Blaisdell Concert Hall in Honolulu. As he was raking-in more sold-out shows, Jo Koy was given the prestigious “Stand-Up Comedian Of The Year” award at the 2018 Just For Laughs Comedy Festival in Montreal. And as if these were not enough, Jo Koy capped four highly rated and successful comedy specials on Comedy Central and Netflix in 2018 which is currently streaming worldwide. And adding another feather to his cap, Jo Koy also acheived the #1 position on the Billboard Charts for his stand-up comedy album, ​Live From Seattle.​

This guy is outrageously on a roll! He's got the comedy chops to get his audiences feeling ecstatic up on their feet and down on the floor rolling with laughter. Nobody does it better than Jo Koy! Book your tickets now!