Grammy Award-winning Christian singer-songwriter Lauren Daigle is back on the road this spring, coming to Moda Center on Friday 24th April 2020 on her extensive world tour! The rising star, whose whose charm and vocal power has seen her become an immensely successful crossover between the Christian and mainstream charts, will be joined by folk duo Johnnyswim in support!

“This year has been life changing,” Daigle previously said in a release. “There’s no better feeling than to be able to look out from the stage and see how people have connected with the songs on this album. Our shows feel like one big party of togetherness, and I can’t wait to create a whole new tour for 2020. It’s going to be so much fun!” 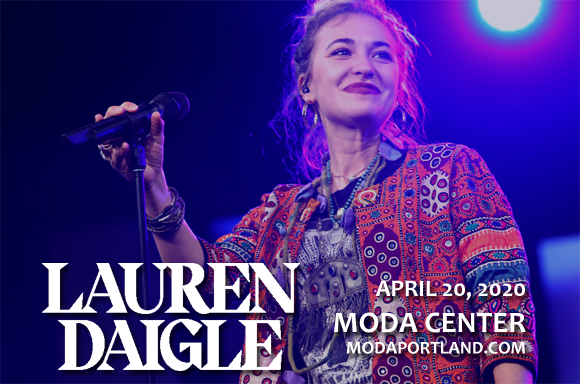 Winner of two Grammy Awards, seven GMA Dove Awards, two Billboard Music Awards and two American Music Awards, Lauren Daigle is a singer and songwriter who has found success in both the Christian contemporary and secular music markets. Her debut album, How Can It Be, was released in 2015 and debuted at number one on the Billboard Christian Albums Chart, as well as reaching number 17 on the Digital Albums Chart and number 28 on the Hot 100. The album produced three singles ("First", "Trust in You" and "O Lord") and was certified platinum by the RIAA. Look Up, Child (2018), her second studio album, is the highest-charting Christian album by a woman in over 20 years, debuting on the Top Christian Albums chart at number one and the Billboard 200 chart at number three. To date, Daigle has charted four number one singles on both the Billboard Christian Airplay and Hot Christian Songs chart.