EVENT CANCELLED. We regret to inform you Maren Morris has cancelled her scheduled 2021 tour. Please request a ticket refund from your point of purchase.

Grammy Award-winning singer, songwriter and record producer Maren Morris comes to Moda Center on Friday 11th September 2020 as part of her RSVP Tour! The 28-city arena and amphitheater trek sees the chart-topping country artist perform tracks from her CMA Award-winning 2019 album Girl, including the massive hit “The Bones”! The tour kicks of just three months after the birth of Morris' son and the new mama will be joined on the road by her husband and fellow songwriter artist Ryan Hurd in support! She'll also be joined by English singer and songwriter James Arthur and fellow Nashville artist Caitlyn Smith! 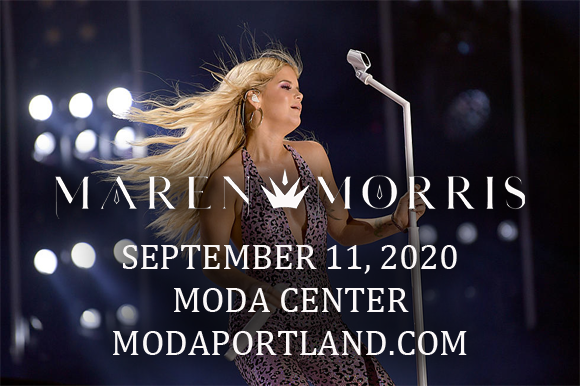 Country star Maren Morris turns 30 this year, but has already been in the industry for an impressive 15 years – half of her life! Releasing her independent debut album Walk On in 2005, the singer, songwriter and record producer put out three independent albums before moving to Nashville, Tennessee in 2011 to become a professional songwriter. After penning several successful songs for other artists, including "Last Turn Home" on Tim McGraw's 2014 album Sundown Heaven Town, and "Second Wind" on Kelly Clarkson's 2015 album Piece by Piece, Morris had her breakthrough as an artist in her own right with a 2015 self-titled EP that she released on Spotify. The collection of songs garnered 2.5 million streams on Spotify in a month and caught the attention of several major labels, including Columbia Nashville who signed Morris later that year. A single from the EP, "My Church" became her breakout hit, suddenly propelling Morris to stardom. The song was re-released as the lead single from her upcoming major-label debut album, peaking at number one on the Country Digital Songs chart in 2016 and reached the top five on the US Hot Country Songs chart, as well as later winning her a Grammy Award for Best Country Solo Performance. Hero, her Columbia debut, was released in 2016 and hit the top spot on the Top Country Albums chart and number five on the Billboard 200, as well as earning Morris four Grammy Award nominations at the 59th Annual Grammy Awards, including a nomination for Best Country Album. Girl, Morris' second studio album, was released in 2019 and peaked at number four on the Billboard 200.