Well, 'the memories bring back, memories bring back Maroon 5's awesome live shows since the 2000s! The band with a man who's got 'moves like Jagger is back on tour, kicking it off at Moda Center on Saturday, 30th of July 2022. Selling over 135 million records since their debut, Maroon 5 gave the world earworms to their best hits such as "Sugar", "Payphone", "She Will Be Loved", "Girls Like You", and "Moves Like Jagger". So, if you've been searching for the 'maps that'll lead you back to the 'daylight, let Maroon 5 frontman Adam Levine take you on a night of the band's best hits live on stage. Book your tickets now! 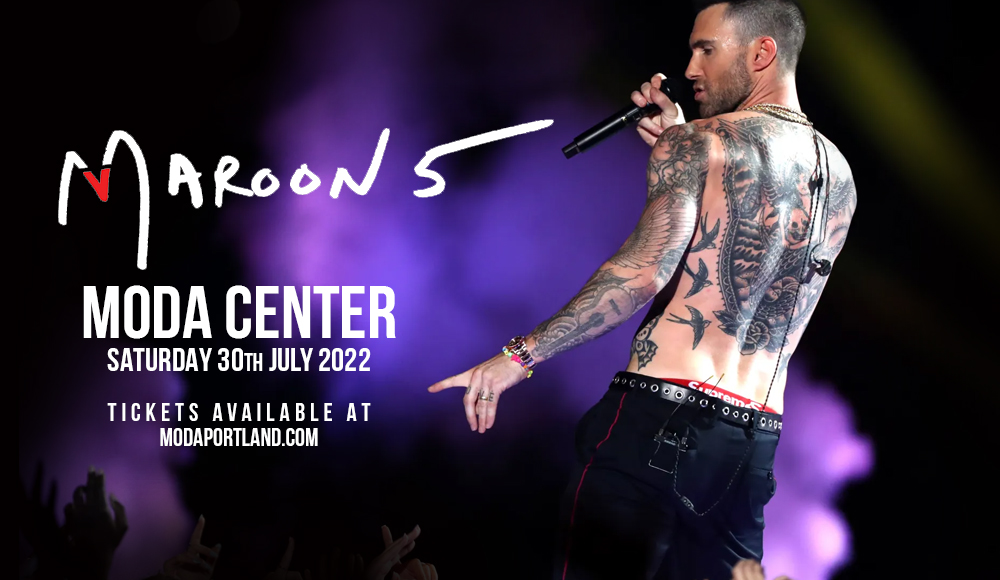 Taking the world by storm and dominating charts since the 2000s with their early hits "This Love", "Sunday Morning", and "She Will Be Loved", Maroon 5 has given listeners across the globe some last-song-syndromes with catchy chart-topping hits "One More Night", "Payphone", "Moves Like Jagger", "Girls Like You", and so on.

Though what seemed like a sudden global debut album success in 2004, Maroon 5 has its first incarnation as "Kara's Flowers" dating back to 1994. After a first shot at the rock scene as Kara's Flowers with Levine expressing their album "a huge disappointment", the band re-emerged in 2001, becoming what the world would soon get to know as Maroon 5.

Lead guitarist James Valentine attended college with John Mayer in 1996 and reunited at a Mayer radio broadcast. When John Mayer heard Maroon 5's first album "Song About Jane", he was impressed, inviting the band to open for him on his 2003 tour. Maroon 5's debut single "Harder to Breathe" in 2002 slowly picked up attention, making the Top 20 in the Billboard Hot 100 in 2004. Though released in 2002, their debut album hit the Top 10 on the Billboard 200 by September of 2004, the longest at the time between an album's release and appearance on the Top 10. "Songs About Jane" sold over ten million copies across the globe.

Between the time that we started making the album [Songs About Jane] in 2001 and the time the album reached the crest of its success in 2004, we went from being starving musicians wondering what the future held to riding a wave of success beyond our wildest expectations. – said Ryan Duck, Maroon 5's former drummer.

Amassing global attention with smash hits "This Love", "Sunday Morning", and "She Will Be Loved", Maroon 5 continued to drop hits after hits throughout the decade and the next.

More of Maroon 5's hits that caused a global earworm to include massive hit singles off of their fourth studio record, "Overexposed", which Adam Levine described as their "most diverse and poppiest album yet". This album includes their RIAA 7x Platinum hit single "Payphone", RIAA 6x Platinum "One More Night", 2x Platinum "Daylight" and "Love Somebody".

In 2021, Maroon 5 dropped their seventh album "Jordi". It includes hit singles "Memories", "Nobody's Love", and "Beautiful Mistakes" featuring Megan Thee Stallion. Selling over 135 million records throughout their career, Maroon 5 is one of the world's best-selling music artists to exits.

So, bring back the memories of the last two decade's best pop hits and new tracks off of their newest album "Jordi" live on stage at Moda Center. Book your tickets now!