Two of the biggest heavy hitters in metal, Megadeth & Lamb of God, are joining forces to descend upon North America this summer with a powerful co-headlining stint that comes to Moda Center on Saturday 4th September 2021! Fans won't just get to see the two iconic bands go toe-to-toe, but with Trivium and In Flames providing support, the line-up is nothing short of unbelievable – the sheer monumental force of the music on this tour will satisfy anyone who loves it loud!

“The world has never needed heavy more than it does today, and top to bottom, this tour delivers," Lamb of God guitarist Mark Morton said. "[We've] toured with and been friends with all of these bands for years, but for all of us to be on the same bill is something extra special. Come early and stay late. This is the metal tour of the year.” 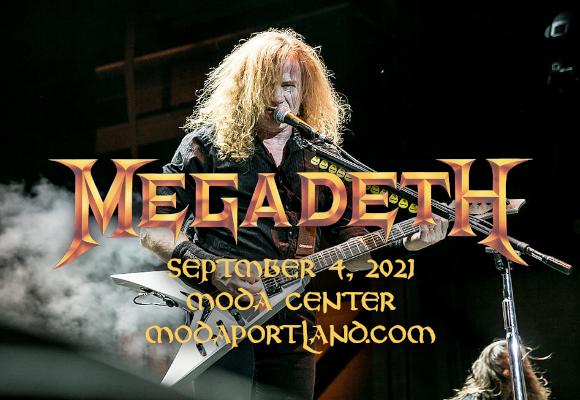 There are few metal bands that have reached the levels of success that Megadeth has. Started in 1983, after frontman Dave Mustaine's departure from Metallica, the band sits alongside Metallica, Anthrax and Slayer as one of the "big four" of American thrash metal – a genre responsible for handing down a huge musical legacy to legions of bands that came after. 11 of Megadeth's 15 studio albums have reached the top 20 of the Billboard 200 (with three of them hitting the top five), and five of them have been certified platinum or above. The band has also been nominated for 12 Grammy Awards throughout its career, winning its first in 2017 – taking home the Grammy Award for Best Metal Performance for the song "Dystopia." The band's 1992 album Countdown to Destruction launched their best-known singles ("Symphony of Destruction", "Sweating Bullets", and "Skin o' My Teeth" ), eventually achieved triple platinum status and gaining the respect of fans and critics alike as a seminal album in the heavy metal canon.