The Godfather of Heavy Metal himself, Ozzy Osbourne comes to Moda Center on Wednesday 15th July 2020 as part of his rescheduled No More Tours stint! The bat-eating showman will be performing from his legendary back catalog, and will be joined in support by fellow heavy metal legends, Megadeth! Although the tour's name sounds somewhat final, fans need not worry – Ozzy isn't hanging up his microphone for good just yet:

“What I’m stopping is doing what I’m doing now — going around the world all the time. I wish people would understand I’m not retiring. Is it my bad English accent? It’s called the ‘No More Tours’ tour. It doesn’t say ‘No more tours ever.'” 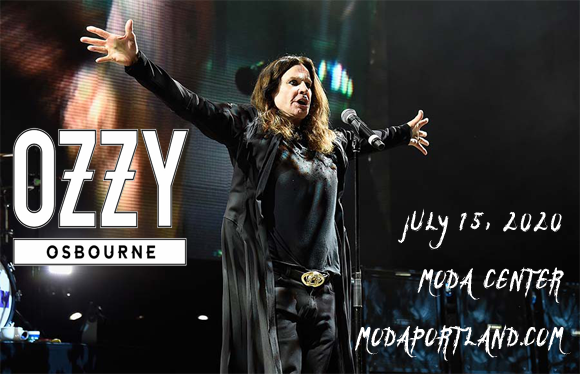 The frontman of British heavy metal band Black Sabbath (1967 – 1979) before embarking on a wildly successful solo career, Ozzy Osbourne is known by many as the Godfather of Heavy Metal. With his Black Sabbath and solo releases combined, Osbourne has sold over 100 million albums worldwide and his first seven consecutive solo albums earned multi-platinum certification in the US. Osbourne has been inducted into the UK Music Hall of Fame twice – once as part of the band and once as a solo artist, and was inducted into the Rock and Roll Hall of Fame as a member of Black Sabbath in 2006. In 2014, Osbourne won the Global Icon Award at the MTV Europe Music Awards, and in 2015 he was awarded the Ivor Novello Award for Lifetime Achievement from the British Academy of Songwriters, Composers and Authors.