Seasons are changing as one of the world's best-selling music artists, Post Malone, just dropped his fourth studio record, Twelve Carat Toothache. The sensational rapper, singer, and songwriter behind global hits "Rockstar", "Sunflower", and "Circles" is taking his new music to life at the Twelve Carat Tour with a pitstop at Moda Center on Thursday, November 3rd, 2022. His new record features his singles "One Right Now" with The Weeknd, "Cooped Up" feat. Roddy Ricch, and "I Like You (A Happier Song)" feat. Doja Cat. Don't miss out on big surprises by the one and only Post Malone at the Twelve Carat Tour as he celebrates new milestones in his life with all of his fans. Book your tickets now! 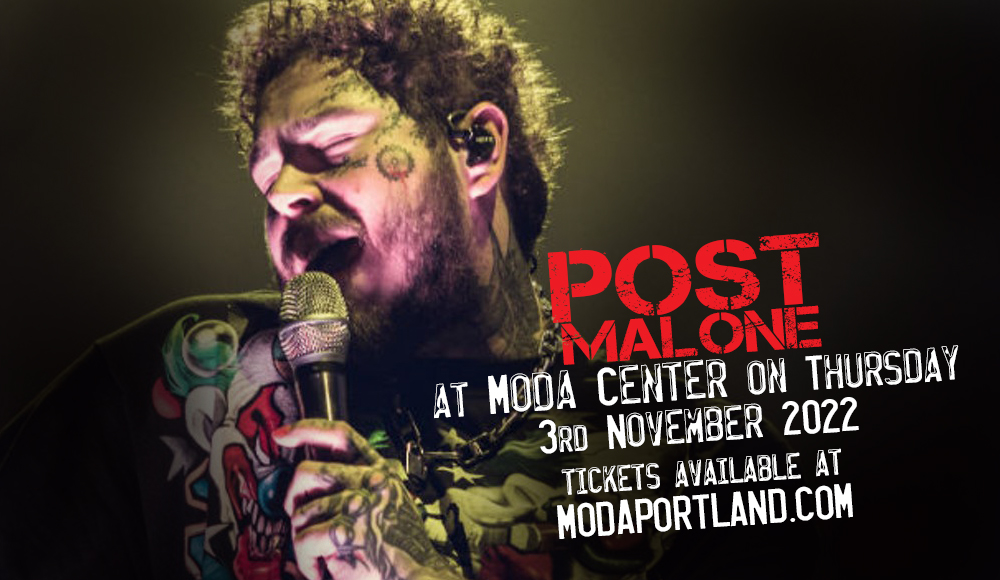 With a brand-new album fresh off the shelves, Post Malone is set to soar to greater heights with his album Twelve Carat Toothache exploring themes of honesty and growth from his struggles with vices in the past. The 'rockstar himself told Apple Music that "The whole thing I want to do is just be honest,". The album features his new singles "One Right Now" with The Weeknd, "Cooped Up" feat. Roddy Ricch, and "I Like You (A Happier Song)" feat. Doja Cat.

As a new dad after having welcomed his first baby girl, he just recently launched a new line of merch for the 'little rockstars' out there. The collection named "The PostyCo Kids" are "cute clothes for little rockstars with sizes ranging from baby and toddler to youth styles," they shared in a press release.

With a fresh new album, his first baby girl, and an engagement announcement, the Twelve Carat era sets victories for the king himself. Post Malone is getting better than ever, saying "I’m excited for this next chapter in my life. I’m the happiest I’ve ever been, and for since I could remember I was sad,"

The nine-time Grammy-nominated singer has sold over eighty-million records globally, taking a spot as one of the world's best-selling music artists. With raw, honest, and striking lyrics sung over hip-hop beats and sick beat drops to unforgettable hooks in his choruses, listeners around the world found Post Malone defining the landscape of mainstream pop, R&B, and hip-hop blends.

His albums "Stoney", "Beerbongs & Bentleys", and "Hollywood's Bleeding" have all bagged multi-platinum certifications from the RIAA. With "Twelve Carat Toothache" making big waves since its big release last June 3rd, Post Malone is set to keep on sailing through his happiest days.

Join Post Malone celebrate this new stage in his life where new music and his biggest hits make the venue resonate and the crowd go wild at the Twelve Carat Tour. Catch him live at Moda Center this November 3rd by booking your tickets now!