The boy from the Bronx with such immense for singing, songwriting, and performing is taking on the world as one of Latin Pop music's distinguished royalty. Prince Royce is destined to reign over more fandoms as he embarks on a tour that would take him to 40 cities across the states. Prince Royce's "Alter Ego" concert tour will take him to this side of town as he is slated for a live show at the concert stage of the Moda Center on Thursday 5th March 2020. Lock-in those tickets now before it's too late. The excitement for this show is on fever-pitch. Hurry get your hands on this hot ticket now! 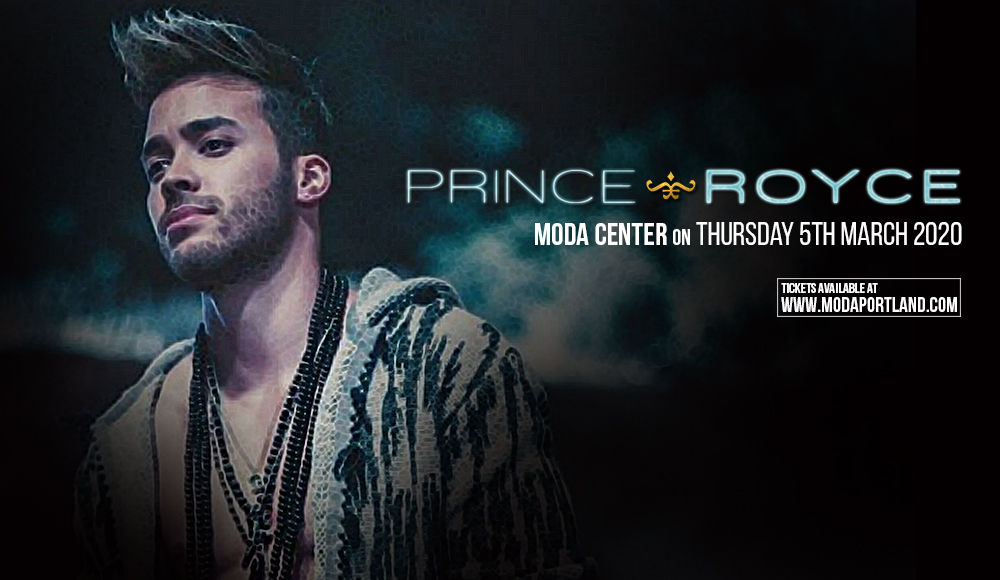 Prince Royce is reigning over his ever-growing fandom and ruling over not only on the Latin charts, but expanded his territory over the mainstream charts as well. In 2010, Royce released his eponymous debut studio album, which spawned two commercially successful singles, "Stand by Me" and "Corazón Sin Cara". Both songs reached topped the Billboard Tropical Songs chart, while "Corazón Sin Cara" reached number-one on the Billboard Hot Latin Songs chart. The album itself reached number-one on the US Billboard Top Latin Albums and Tropical Albums charts. Along the way, he scooped up three awards at the Billboard Latin Music Awards in 2011. Consequently, his second studio album, "Phase II" , occupied the number-one spot on both the US Latin Albums and Tropical Albums charts, and was nominated for the Latin Grammy Award for Best Tropical Fusion Album.

But this boy from the Bronx was ready for the world. Prince Royce's first primarily English language album "Double Vision" included the singles "Stuck on a Feeling" featuring Snoop Dogg and "Back It Up" featuring Jennifer Lopez and Pitbull. This career milestone which brought him collaborating with these superstars and icons, held significant chart action on the Billboard Hot 100.

And now Prince Royce is poised to cover more ground as he marks his largest ever US tour, dubbed as "Alter Ego" concert tour.

“I’m doing the biggest tour over 40 cities, it’s almost double the dates I did on my last tour and I’m really excited that I will visit places I’ve never been before,” says Royce. “This tour will bring me closer than ever to my U.S. fans, he continues. "I am so happy I will be visiting so many cities with the brand new ALTER EGO concert experience where I’ll be performing all of my classic hits and of course the latest music from my upcoming album."