Why Don't We Tickets

Why Don't We is back for a good time to meet their fans and serve heart-fluttering performances of their best hits and new beats off of their new album "The Good Times and the Bad Ones" at The Good Times Only Tour! Hop in Why Don't We's best era yet, live on stage at Moda Center on Wednesday, 21st of September 2022. The boys behind the global smash hit "8 Letters" just dropped their newest song "How Do You Love Somebody" filled with electrifying energy and lyrical relatability. Get ready to fall in love even harder when you meet the boys on stage at The Good Times Only Tour by grabbing your tickets now! 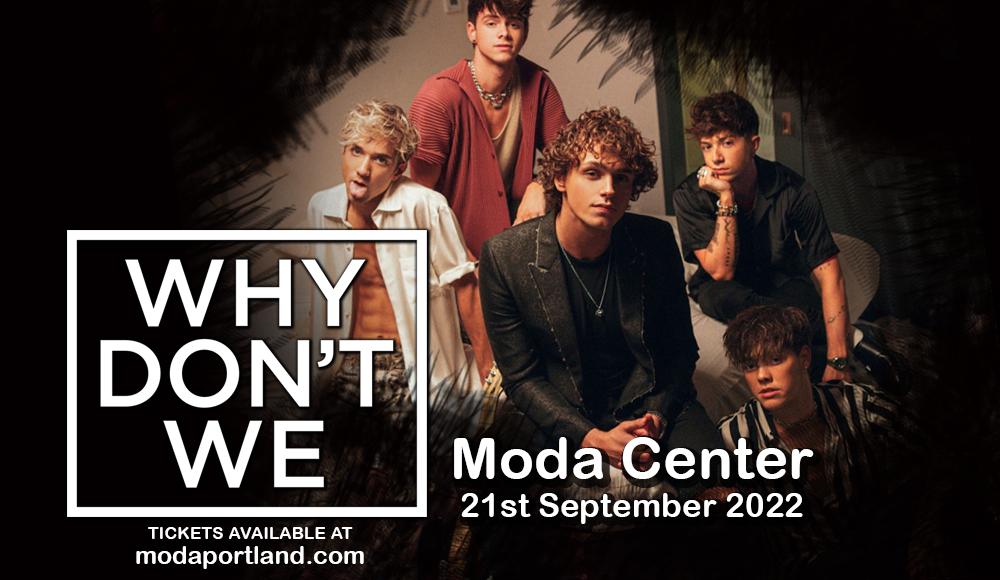 After a short pause in ticket sales for The Good Times Only Tour, Why Don't We is back to kickstart the extensive tour in support of their second studio album "The Good Times and the Bad Ones". The record is a proudly shared effort by the members themselves, the band expressing that “This album is the first time that we’ve ever really told the story ourselves,”.

Why Don't We is made up of heartthrobs Jack Avery, Corbyn Besson, Zach Herron, Jonah Marais, and Daniel Seavey. It all started when the boys met up in LA, and formed what the world would come to know and love as Why Don't We. They released their debut single "Only the Beginning" in 2016, and it definitely was just the beginning as they started to amass worldwide attention in 2018 with the release of their debut studio album "8 Letters".

8 Letters features the band's singles "Trust Fund Baby", "Hooked", "Talk", and "8 Letters". With more and more listeners and fans joining the family, they released "Big Plans" at the onset of 2019, and a slew of more singles including "Cold in LA", "What Am I", and "I Don't Belong in This Club" featuring Macklemore.

After their final single for 2019 "Chills" was released on December 30th, the boys went on a nine-month break. In September of 2020, Why Don't We re-emerged and released their second album's lead single "Fallin' (Adrenaline)". The track hit the Top 40 of the US Billboard Hot 100, marking a milestone as their first entry on the chart.

In January of 2021, the band finally released their sophomore record "The Good Times and the Bad Ones. The album hit #3 on the Billboard 200. Prior to its release, the boys appeared in a YouTube documentary called "30 Days With". Fans were given exclusive behind-the-scenes footage of the band's last stages of preparation for their new album.

The album is largely self-written and self-produced by the boys themselves, featuring some guest productions by Travis Baker, Skrillex, and Timbaland.

Why Don't We is proud of their milestone with The Good Times and the Bad Ones since this record serves as a testament to their own talent and efforts. The boys previously shared that in their past interviews during 8 Letters' height of success, “They were asking us what the songs meant to us and it was like, ‘Oh, this isn’t a song that we even wrote.’ It was hard to be able to talk. We had people trying to tell us what to say,” shared Jonah Marais.

With their new record being a shared effort to write and produce themselves, “This album is the first time that we’ve ever really told the story ourselves,” said Corbyn Besson.

"The process before was, we’d listen to songs and make some changes and fall in love with them and put them out. But this album is 100% purely us, so it feels really big for us in that sense."

With a bright future ahead of them, Why Don't We is set to spend good times only aboard The Good Times Only Tour as they celebrate this milestone with their very own fans. Don't miss out on Why Don't We performing their best hits and new bops live on stage at Moda Center this September 21st. Book your tickets now!