Zac Brown Band is a band that knows itself well. With a history of relentless touring that brought it where it is today, the homespun group has an impeccable work ethic that continues to this day, and the benefits of which can be seen with every lively, passionate, improv-led show that it plays! This summer, the group comes to Moda Center on Friday 16th October 2020 on the Roar With The Lions Tour, which will delight fans with a set of thematically relevant Zac Brown Band songs, as well a generous sprinkling of covers from across a range of music genres! According to Brown, these songs will reflect what he deems to be the characteristics of a lion: strength, courage, loyalty, fearlessness, sunshine and warmth… All characteristics that could be applied to this, hard-working, genre-bending, joyful band! 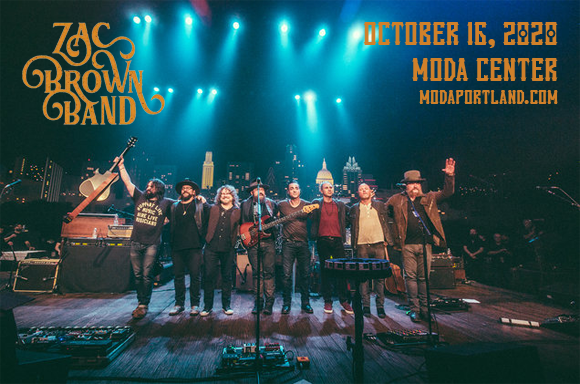 Zac Brown Band is no overnight success. It took six years of non-stop shows for the band to be signed to a major label, and five years for its debut single, "Chicken Fried", to become a number one hit. However, when the world finally cottoned on to the group's brilliance, suddenly things became very different for Zac and co. "Chicken Fried" was the lead single from their major label debut album, The Foundation, and both the single and the album were certified five-times platinum by the RIAA. After that, there was no stopping them as they went on to chart 16 singles on the Billboard Hot Country Songs or Country Airplay chart, including 13 number ones, release six hugely popular studio albums, and win three Grammy Awards. The group's latest album, The Owl, was released in 2019.