The groundbreaking superstar and soulful queen Alicia Keys is heading out on the road to embark on a mission to bring her collection of music to her fans in a live audience setting. The amazing singer/songwriter and pianist is known globally for her incredible work within the industry, since her early days of tracks such as "Fallin" she has become an accomplished artist and has influenced the masses! Join her as she heads on down to Moda Center on Wednesday 31st August 2022 (Rescheduled from Wednesday 1st September 2021)! 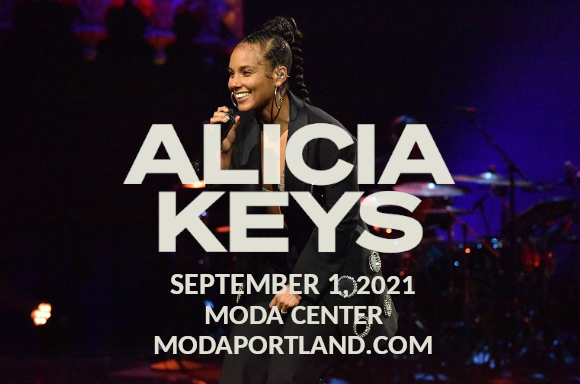 Alicia Keys is one of those artists that just keeps on giving with her feel good and emotional wide catalogue of music releases, she has become an international star, loved best for her soulful attitude and flawless vocal capabilities. With her powerful songs she has crossed over many genre's from her jazz and soul roots to a more mainstream widely accessible sound. The talented classically trained pianist has showcased throughout her long standing career that she sure knows how to craft a hit song as she has topped the charts non-stop and always gives an iconic performance during her live concerts.

First starting out in music at just 12 years old, Alicia Keys realised quite early on that she was destined to be a musician. With her love of piano, she began to song write and showcase her beautiful voice. By just 15 years old, she made a sign to a record label and later captivated the hearts of many music fans with her debut album, Songs in A Minor. 2001 was an important year for R&B music and Alicia Keys was very much at the top of the list for the must-listen to artists. She gained enormous success for her release and has transformed the music scene ever since.

Alicia Keys has dropped countless records ever since, always with a slightly different style to the previous and to the next, but one thing has remained true and that's the originality and uniqueness that she possesses. Songs such as "Fallin" "If I Aint Got You" "You Don't Know My Name" "My Boo" "Empire State of Mind" "Girl On Fire" are just some of her biggest single releases to date and have all taken to the top of the charts and remained to be some of her best loved material to this day.

What ever Alicia Keys sets out to do, she conquers and with her development on her writing throughout the years, she has also taken the time to look inward and ensure that she truly represents herself inside and out – making her a rare gem on the music scene!

Come and catch Alicia Keys live in concert this year as she will be gracing the stage with a show stopping experience that only Alicia Keys can provide! Expect to hear all of your favorites along with inspiring improvised moments, this true artist always blows the crowd away!